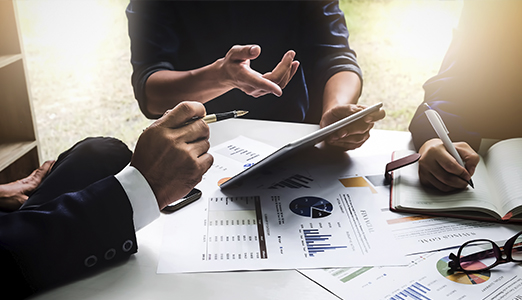 Let’s answer that question by exploring various developments, news and trends around compensation.

Wages, pay, compensation. Whatever you call it, it’s likely forcing your business to evolve. So, are you evolving? And are you evolving in a way that’s mutually beneficial for your business and your employees? If you’re aware of—and reactive to—the following developments, news and trends, you’re on the right path.

It’s really modest, but it is happening—at least for certain positions. Some recent data from USA Today reflects that. It shows that the median base pay for U.S. workers rose by 1.6% in June of 2018, but that only tells part of the story. Certain jobs are realizing nearly 10% year-over-year wage growth, while others remain flat, or have even slightly decreased. Does your company’s compensation align with this data? Are you paying enough to attract and retain the talent you need? As job seekers continue to gain market leverage, you can’t leave your pay rates stagnant and expect to consistently land top talent.

Speaking of retaining talent, pay’s still your best means for doing that. And we recently proved this with our own proprietary data. Now, even though our data is based on hourly pay, the same principle holds true for salaries. The bottom line is this: the better you pay, the less turnover you have. It’s the best way to cut recruiting, hiring and training expenses, build a better culture and employ the talent you need for whatever comes next.

More than ever, competitive pay (50th percentile and up, the higher the better) also helps productivity levels. While there are plenty of theories that better pay leads to greater motivation, yielding more consistent production, it’s obvious that better pay leads to better retention and less workforce interruptions, yielding more consistent production. This is why, when conducting market research, determining what to pay and projecting your return on investment, it’s important to not only consider pay rates and turnover costs, but also production levels.

Pay for Potential (not Performance)

In the past, “pay for performance” was the only pay strategy. Nowadays, it still dominates. But there’s a new way of thinking: “pay for potential.” Instead of paying for performance-related tasks that were completed, companies pay for performance-related tasks that will be completed. Sure, it’s a gamble to assume any employee will do great things, but paying them better from the start will help motivate them to do those things. It’s a psychological boost for your most talented talent of all—and potentially a way to gain their loyalty.

Another shift that we’re witnessing is transparency. Believe it or not, some workers actually talk openly about pay. Why? Because they’re curious, and they want to know if they’re being paid fairly. This is forcing the hand of businesses to do the same. Job candidates especially want to know what a job pays before spending time applying, interviewing and negotiating. Who can blame them? Furthermore, the Prior Pay Law, which has been adopted in many states, makes it illegal for interviewers to ask candidates about pay history in order to determine salary offers. Again, forcing employers to be salary transparent from the get go.

Today, on average, women still earn less than men for the same job. Most outlets, including the American Association of University Women, report women earn about 80% of the pay of men. The question is “why?” Yes, some women opt for maternity leave or even to stay at home long-term after having a child, which can delay their career trajectory, but that’s only a small part of the story. All things equal, there should not be cases in which men earn more than women. Not to mention, a perk of having not only the right blend of men and women, but also the right blend of ages and demographics, is that companies will have a variety of backgrounds and perspectives to rely on when it comes to creativity, PR, social responsibility and more.

Will the federal government’s corporate tax cuts trickle down to workers?

This year, since the federal tax reform, large companies’ profits have risen sharply, yet workers across the lower- and mid-levels of the totem pole have hardly noticed pay increases. Will a tight labor market and increase in job-hopping force companies to boost pay? In theory, you think it would, but it hasn’t necessarily happened yet. It has certainly increased the number of jobs, but hasn’t increased pay to the level many hoped. Regardless, this is something to closely monitor in the near future.

What should you do?

Well, your business should assess your current situation, ensure you’re at least paying competitively, use timely raises to retain talent, pay for potential, be transparent and be fair. OK, that’s the easy answer. It’s also a lengthy list that’s easier said than done. But if you want to continue to attract and retain the best job candidates, you might not have a choice. Pay is, was, and probably always will be the top job factor.

Having said that, where should you start? There’s no better place than our Salary Guides. They’ll provide you with accurate salaries for countless positions, unique to your company size and locale. If you leverage them, you can’t go wrong.